Mary Maxtion was born in Sumter County, Alabama on March 19, 1924. She moved to Boligee, Greene County, (due east of Sumter) at three. Her mother died when she was 11 and she then lived with a sister. Mary learned to piece a quilt from her mother and how to quilt from her sister. She has always quilted by hand.

Mary left school after the 9th grade to have a baby. She has lived virtually all her life in Boligee, except for 23 years in New York. She worked as a domestic and at a cleaners while in New York and as an outreach worker to new mothers in Boligee. More recently she has spent time with the sick and infirm who needed help.

In the 50’s, Mary made quilts for herself. Or, if someone “needed a quilt, [she] gave a quilt”. They were necessary for warmth. The houses were drafty with no central heating. As Mary put it, “you could look through them”. Mary did not quilt while living in New York. She started one, but sent it back to Boligee to be finished. Only when individuals such as Dr. Robert Cargo became interested in African American quilts did she sell them. 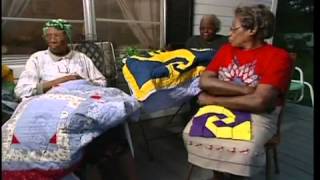